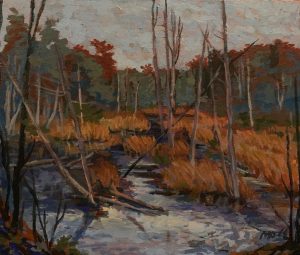 On a cool and dark September morning in 2016 I stood at the Champlain Lookout. I didn’t feel emotionally moved and I didn’t see a composition that called to me to be painted so I drove south to King Mountain. I stopped at a swamp along the way and enjoyed looking at the grasses and trees and reflected sky. Oranges and rust colours seemed to give this swamp warmth and life (despite the deadness of the water-swamped trees). An otter swam and dove in the murky water. I love otters. They are such playful creatures.

Moving on to the King Mountain parking lot, Black Lake was calm. I walked past the beaver dam and hiked up the steep hillside as the grey light began to brighten. As views of the Eardley escarpment opened up to my left, the sky was morphing to yellow and pink as the cities of Gatineau and Ottawa sat sleepily in the distance. There is a tree that I love here. I believe that it is a jack pine. It is gnarled and strong and has a remarkable silhouette from different vantage points. The escarpment has a microclimate which contains some unique flora and fauna such as red cedar (for more information see Historical Walks by Catherine Fletcher).

This painting was inspired by a photo from this hike. At this stage of my life, I had not discovered the joys of plein air painting. Painting sunrises can be challenging because of the changing light. This is a favourite place for me to watch the sunrise. I hope someday to paint a sunrise or even a nocturne here.

I moved along the path to a lookout facing west. From here the Ottawa River and Lac Mountains are visible and a red tree seemed beautiful and serene. The light was still dim and I was interested in the tones more than the colours. Some time after this hike I produced this painting which is painted using three tubes of paint: deep cadmium red, hooker’s green and titanium white. The limited palette encourages exploration of tones. A friend once encouraged me to try this exercise and is an exercise that I would highly recommend to artists.

The history of this spot: While I had thought that this trail was named after former Prime Minister William Lyon MacKenzie King, in fact, the origin of the name is unclear. I have also learned that people skied down the escarpment here and there was even a ski race in this part of the park. This is hard to believe given the steep pitch. The ski race was apparently cancelled after somebody died on one of the downhills and the trail no longer exists (Malcolm Hunter, 2018).

Hiking back to the car involves hiking through mixed forests with mature maple and beech and brings you back to Black Lake. This hike is somewhat challenging due to the elevation changes but is 2.5 kilometres long and provides a much more beautiful view of the escarpment than the Champlain or Huron lookouts.

I returned to this spot two weeks later and was surprised to see that the red maple had lost all of its leaves. Painting in the autumn is exciting because everything seems to be going through rapid change but it also means that beloved scenes are fleeting.

This is a beautiful trail that that offers interesting lookouts and a variety of ecological zones and flora and fauna. It is a worthwhile alternative to the very popular Champlain and Huron lookouts.